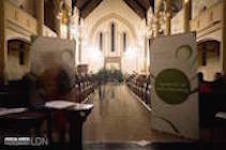 On behalf of Arthroplasty for Arthritis, Chelsea Concerts gave a Christmas Opera Concert at Christchurch, Chelsea. 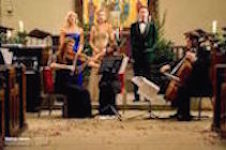 Matt on Cello played a passionate tribute to the First World War Centenary in the opening piece of Benedictus from The Armed Man by Karl Jenkins. Alex sang like an angel in her rendition of John Tevener's Song of the Angel, while she and Oliver together gave marvellous performances of several well known pieces including John Jacob Niles I Wonder as I Wander, Franz Gruber's Stille Nacht and Howard Blake's Walking in the Air. Rupert gave a delightful presentation of Mozart's Variations on 'Ah, vous diraj-je Maman' while violinists Victoria and Stephanie sparkled in their entertaining portrayals of Por una Cabeza (Carlos Garbel) and Czarda (Vittorio Monti). A Christmas concert would not be complete without Irving Berlin's White Christmas and Natalie performed a cleverly reworked version to fit the setting of the concert in Chelsea.
Chelsea Concerts Performers 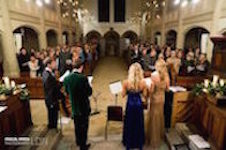 Chelsea Concerts at Christchurch Chelsea
All the performers presented He shall feed His flock and Come unto Him from Handel's Messiah and the audience was invited to join the performers to usher in Christmas by singing Hark the Herald Angels and Good King Wenceslas.

A glass of festive cheer and mince pies topped off what was a truly enchanting evening!

Thank you to everyone who supported Arthroplasty for Arthritis at this event.